Is it Safe To Sell Your House Now

It might finally be time to come out of the basement.

Home prices nationally climbed 8.3% in December from the same period a year earlier, according to CoreLogic, a real-estate analytics company. The increase was the largest since May 2006 and the 10th consecutive monthly gain. The CoreLogic figures include foreclosures and other distressed sales. 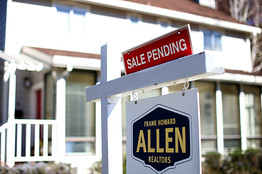 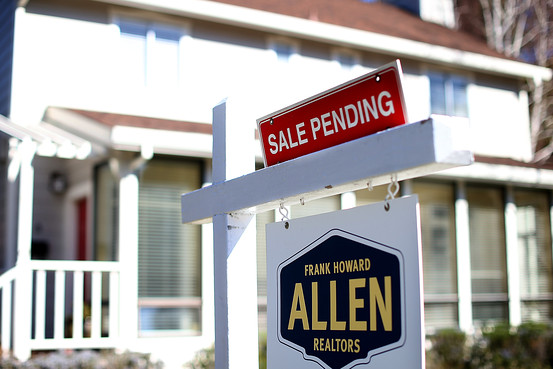 Getty ImagesA home for sale this month in Larkspur, Calif. 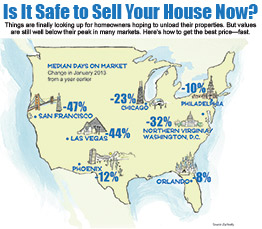 The gains are good news for would-be sellers who have been stranded on the sidelines since home prices peaked in 2006. Nearly one in four homeowners and renters say now is a good time to sell a home, according to a survey released this month by Fannie Mae, the government-backed mortgage company, up from 11% a year earlier.

“You will unambiguously see more people test the water,” says Thomas Lawler, an independent housing economist in Leesburg, Va. He expects home prices to rise another 3% this year.

Thinking about selling? You are likely to find a buyer more quickly and at a better price if you factor in local market conditions and recent sales before setting an asking price, burnish your home’s Internet profile and plan ahead for a home appraisal.

Acting soon may pay off as well. While trends vary by region, buyer search activity generally peaks in March and April, while seller listings peak in July, says Jed Kolko, chief economist at real-estate website Trulia.com. “Most sellers would be better off if they pushed the process up a couple of months,” he says.

Sellers could face headwinds if mortgage rates jump or the economy weakens, while the supply of homes for sale is likely to increase over the next few months, creating more competition, say real-estate agents.

Don’t expect to make a killing. Even after the recent gains, home prices remain about 27% below their 2006 highs, according to CoreLogic.

In some markets, prices remain so low that selling is likely to prove painful—unless you are looking to buy a more expensive home at a discount.

“The only reason I would sell today is if I wanted something more than I currently have,” says Craig Beggins, president of Century 21 Beggins Enterprises in Tampa Bay, Fla., where prices are still off more than 40% from their 2006 peak.

Still, in many markets, sellers have more of an edge than they have had in years. One big reason: The number of existing homes on the market dropped to 1.74 million in January, down 25% from a year earlier and the lowest level since December 1999, according to the National Association of Realtors. 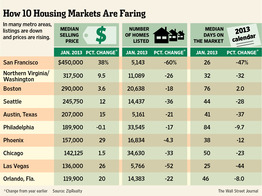 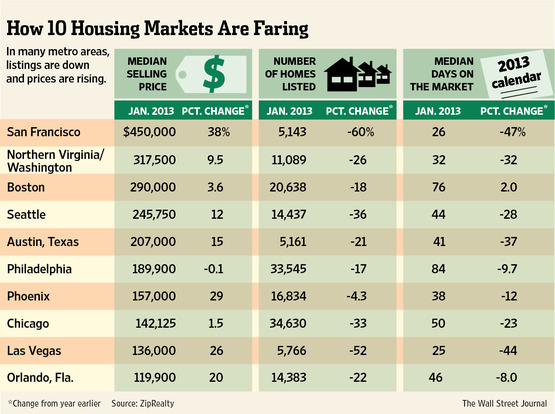 Houses are also selling faster. The median number of days on the market for homes in January was 71, according to the Realtors group, meaning half of all homes sold within that time. That’s down from 99 days one year ago.

Elizabeth Tolli first put her 4,400-square-foot St. Petersburg, Fla., house up for sale in late 2009, but took the listing down a year later after not receiving any offers. She recently put it back on the market.

“I feel more confident, even if prices aren’t at the height they were six or seven years ago,” says Ms. Tolli, who has set a $1.2 million asking price for the five-bedroom waterfront property. That is more than it would have fetched a year or two ago, she says, but still well below its peak value of more than $2 million.

If you are thinking of making a move, start by assessing conditions in your local market. Lanny Baker, chief executive of ZipRealty, an online real-estate brokerage based in Emeryville, Calif., suggests focusing on five measures: price changes, the inventory of homes for sale, competition from foreclosures, the average time it takes a home to sell and the gap between selling prices and list prices.

In markets such as Las Vegas, San Francisco, Los Angeles and Washington, D.C., “prices are up, competition is down, bank competition is down more, days on the market are shorter, and the prices being realized relative to the list price have really improved,” all good news for sellers, Mr. Baker says.

But sellers shouldn’t be complacent. Here are some steps to consider.

Interview multiple agents. Some people prefer to handle the selling process themselves. But if you plan to use a real-estate agent, start by interviewing several contenders.

Mr. Baker of ZipRealty suggests narrowing your search to agents who have handled many sales in your neighborhood. They are likely to have the best view of local market conditions and can better assess what your home may sell for and how it should be marketed, he says.

Nancy Vaske, a jewelry designer in Chicago, interviewed four brokers before putting her 1,800-square-foot condominium on the market this past week for an asking price of $995,000.

“I wanted to know whether they had sold any units in my building because it’s a specific market in the city, and whether they’ve represented the buyer or the seller,” she says.

The broker Ms. Vaske chose has represented both sellers and buyers in her building, and “probably knows more details about the workings of this building than most residents do,” she says.

Adjust your sights to today’s market. Set aside what you home might have fetched in 2006 and focus instead on what homes are selling for today.

Dan Elsea, president of Real Estate One in Detroit, uses recent sales as his guide, paying particular attention to properties that have received multiple offers. He prefers the homes he sells to be among the five lowest-priced properties among similar homes. “Typically, a buyer will see and remember five homes at a time,” he explains.

Pay attention to how long competing homes have been on the market. These days, well-priced homes often sell in a week or two, while homes that languish for months are typically priced at unrealistic levels.

Don’t overreach. Given today’s thin inventories, it is tempting to reach for the stars. But if you get greedy and set the price too high, you are likely to wind up in a downward spiral.

“You are going to have your largest viewing audience in your first days on the market, when the house is the newest product on the shelf,” says Lloyd Fox, a broker at Long Realty in Scottsdale, Ariz. If the price is too high, buyers and agents are likely to relegate your listing to the sidelines.

Properly priced homes are likely to get eight to 10 showings their first week on the market and an offer soon after, Mr. Fox says. If not, “you have missed the market” and it’s likely a price cut is in order, he adds.

Make the Internet work for you. Most home buyers and agents are now starting the search process online, which means it is important to make the Internet a key part of your marketing strategy. Begin by carefully selecting the photos you will post online.

For maximum impact, start with the photo “that is going to tell the best story of your home,” whether it’s the front view or a special feature, says Mr. Fox, the Scottsdale broker. Too many shots of a single room could bore buyers, he adds.

For Kenneth Vaughan’s Phoenix home, Mr. Fox started with a photo of the home’s exterior to show its “curb appeal,” followed by photos of the living room, kitchen, backyard and master bedroom and bathroom. The home, which is selling for $119,900, received three full-priced offers in the first week, says Mr. Vaughan, a retired police officer.

Weigh multiple offers carefully. In cases of multiple bidders, you should focus not just on price, but also on terms.

In comparing two competing bids at similar prices, Kristine Lambrecht, an agent at Real Estate One in Clarkston, Mich., recommends choosing the buyer who is putting down more cash or is willing to forgo an inspection, since those deals are likely to close sooner and with fewer hassles. If she thinks the appraisal will be lower than the sale price, she will take a slightly lower bid if the buyer is willing to guarantee the purchase price.

Clean up your act. Even in a market where inventories are thin, a home isn’t likely to sell if it looks shabby or crowded. At a minimum, you’ll need to touch up the paint, clean the carpet and pare your possessions.

Suzanne Peltier, who lives in Farmington Hills, Mich., hired a handyman to patch loose bricks and touch up the paint on her four-bedroom Colonial before putting it on the market. She also removed some of her furniture so the home looks bigger.

Julie Kaczor, a broker at Baird & Warner Real Estate in Chicago’s western suburbs, advises clients to get rid of magazine racks, statues, fireplace tools and anything else that can clutter up the edges of a room. She looks for inexpensive fixes with good payoffs, such as a fresh coat of paint, removing outdated window treatments or a carpet cleaning.

Ron Phipps, principal broker at Phipps Realty in Warwick, R.I., often sends clients to other sellers’ open houses to size up the competition and get a better sense of how buyers may view their home. “It’s a good way to do counterintelligence,” he says. “It’s also a good way to see what works in terms of staging and presentation and what makes you uncomfortable.”

Plan ahead for the appraisal. About 30% of real-estate agents reported that low appraisals had resulted in the cancellation, delay or renegotiation of a purchase, according to a January survey by the National Association of Realtors.

You can reduce the chances you will encounter problems by providing the appraiser with examples of comparable sales and pointing out special features. Barbara Moody, an agent at Coldwell Banker United Realtors in Sugar Land, Texas, prepares a booklet for appraisers that includes examples of comparable sales, information about the home and receipts for substantial upgrades such as a swimming pool or kitchen renovation.

When a recent sale was almost torpedoed by a low valuation, Ms. Moody showed the appraiser comparable homes he had missed. The result: The appraiser raised his valuation by $7,000 to $129,000. The buyer and seller then split the difference between the appraised value and the $132,000 price they had initially agreed on.

Jan Baker, the home’s former owner, says the deal would have fallen through without the higher appraisal. “I would have had to have rented it again,” says Ms. Baker, a lawyer who purchased the home in 2005 for $136,900 and now lives in Midland, Texas.